This map presents a 10-year summary of USArray-supported seismic deployments. The Reference Network provides a permanent backbone of TA stations for long-term observation and monitoring, and FlexArray experiments are PI-led temporary deployments of seismometers with a specific geologic target. State and regional networks routinely adopt TA stations, and a major initiative across several Federal agencies supports the operation through 2017 of approximately 160 TA stations as part of the Central and Eastern United States Network (CEUSN).

With funding from the National Science Foundation, IRIS operates EarthScope’s USArray. Its goal is to use the North American continent as a natural laboratory to study the structure and evolution of Earth. This observatory is a multi-purpose set of geophysical instruments, comprised of mostly seismometers, which have been operated across the continent since late 2004. The Transportable Array (TA) component, a set of 400 top-of-the-line temporary seismic stations that migrate from west to east in a continuous footprint on a grid with ~70 km spacing, has occupied nearly 1700 sites across the U.S. and southern Canada.

Most large science projects exhibit careful planning and execution, however, not all have revolutionized an entire discipline, spurring unexpected discoveries and inspiring the next generation of scientists. Uniform in both quantity and quality, USArray data fuels unprecedented new ways to study the Earth. Real-time, unrestricted access to TA data permits worldwide usage. This has fostered key advancements in topics ranging from geophysical imaging to detecting and characterizing earthquakes. 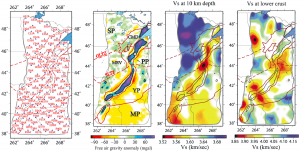 For example, the quality and scale of USArray even demonstrated the usefulness of seismic “noise”. The microseism, a background hum from oceanic waves and storms, is observed continuously at seismic stations. Surface waves embedded within the microseism show subtle variations from station to station within an array like the TA. Professor Michael Ritzwoller (University of Colorado-Boulder) and his research group pioneered a technique called “ambient noise” tomography, which harnesses this background energy to map variations in shear wavespeeds beneath the TA. Ambient noise tomography provides better resolution at shallower depths compared to traditional earthquake-based methods. Its use has redefined fundamental geologic boundaries and discovered new features in the crust and upper mantle of North America. Best of all, the method can be adapted to data sets collected at many sizes and scales.

Over the last decade, the TA has recorded some of the largest and most devastating earthquakes in history. Faults producing earthquakes with magnitudes >8 typically have complicated ruptures, which require detailed analyses to understand. A recently developed technique called “back projection” was applied to TA data by Professor Miaki Ishii (Harvard University) and graduate student Eric Kiser (now at Rice University) for the 2010 Chile  and 2011 Japan earthquakes. This method uses the P-wave arrivals recorded across a large array and telescopes them back to their source, illuminating where, when, and how the fault ruptured. Now IRIS uses this technique with TA data to generate reference back projections within hours of large earthquakes. These permit a closer inspection of how a specific earthquake occurred, with implications for better understanding a fault’s future behavior. The TA is the largest array available for routine, near real-time processing of back projections, and its uniform spacing and coverage makes the process especially robust.

Detailed back projection analysis for the 2011 M9.0 megathrust earthquake in Japan shows how the location and coincident energy release of its rupture complexly evolves in space and time. Figure from Kiser and Ishii (2012), doi:10.1029/2012GL051170

In both examples, students played vital roles, forming a foundation for their careers and contributing to the future direction of seismological investigations. Even after the EarthScope program ends following the TA deployment in Alaska, the rich USArray dataset will continue to encourage future earthquake scientists to devise new analyses and interpretations. IRIS recognizes the manner in which USArray drives innovation in the field of seismology. To stimulate this process IRIS, along with the support of volunteers from the seismological community, organizes USArray short courses to equip young scientists with the tools to make the next potential breakthroughs. Over 120 students have attended five of these courses since 2009.

At the recent USA Science and Engineering Festival in Washington, DC, one visitor to the IRIS display mentioned growing up in Lone Pine, California. Coincidentally, my Ph.D. hinged on understanding why her hometown’s nearby Sierra Nevada Mountains were so unusually high despite their old age. I studied this problem using a deployment of USArray’s seismometers. Describing what I had learned clearly amused this person, who appreciated the surprising new dimension to her home’s landscape. This interaction underscores the value of a project like EarthScope’s USArray. Beyond its scientific achievements, it imparts a new understanding of our entire continent down to a small town in the rural west. This “sense of place” excites and reinforces a spirit of curiosity and exploration that can drive a vital culture of geoscience research in America long into the future.

Since July 2011 Andy has worked for the IRIS Consortium, which facilitates the collection and dissemination of seismographic data used for scholarly research and public understanding of Earth science. Previously he studied the structure and evolution of mountain ranges by using distant earthquakes as imaging sources.

Please join us for an EarthScope symposium and reception May 15th as we acknowledge and recognize the contributions of the National Science Foundation, its partners, and the numerous organizations and agencies throughout the government that have made the past ten years of EarthScope a resounding success. If you are a scientist, policymaker or other information consumer whose work benefits from EarthScope data, this is an excellent opportunity to express your appreciation directly to the individuals and organizations that have helped EarthScope in ways both large and small.

Posted in: Value of science No Comments/Trackbacks »